February 07, 2014
Looney Labs, best known for the many versions of their card game Fluxx - a chaotic game of ever-changing rules and goals - have created something much simpler with their new game Choose One.  In essence, they have distilled the "Getting to know you" game to its purest form.


In Choose One the active player is asked to select a card from five in her hand, each of which contains two options (for example, Godzilla and King Kong), and do just that: choose one.  All the other players must then attempt to guess which one best suited the active player - using whatever means they can; intuition, knowledge based on a long friendship with the active player, getting a read or "tell" on the person, a wild-ass guess or just straight-up mind reading.  You'd think that it would be necessary to know the other players well to win this game, but I am here to tell you in a recent game I hosted, it was the newbie outsider who guessed most accurately and won the game.  Of course, it's possible random chance played some sort of role, but in any case, a party game is not about the points, it should really be about people's reactions to the choices, and the social interaction that follows ("What do you MEAN you'd choose evil children over an evil clown!"... "Well, an evil clown just seems more effective at doing evil.  The evil children are just kids.") 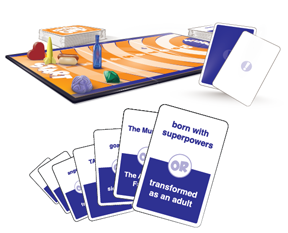 The choices on the cards are family- and kid-friendly and seem often to be geared to a geeky crowd; you may find yourself choosing between Spider-Man and the Hulk, for example, or in the limited edition promo pack, you'll find a card that asks you to choose between Kirk and Picard.

The instructions make it clear that you must be honest in your answers - this is not a bluffing game.  The way to be tricky as the active player is to choose a card from your hand that won't give the others an easy guess.  For example, I would never play "Halloween or Christmas" if there were such a card - my friends would know instantly I will pick Halloween every time.  (And if they're at my house, people who have just met me will probably know as well, just because of my everyday decor.)  Instead, I might pick a card that had "Thanksgiving or Independence Day" which would be somewhat tougher.

One of the great things about Choose One is the game lets you dump and replace any or all of your remaining cards from your hand after you take your turn.  This is handy if (as with my newbie winner I referenced above) there are  things on the cards you are not familiar with or that would be too obvious a choice for you.  This rule lets you refresh your hand and find some good cards to choose from.  There are some interesting choices!

Something else my players loved about the game was the player tokens.  Like a modernized Monopoly, players represent themselves with a quirky assortment of cute tokens like a long blue wine bottle, purple brain, or shiny hardware nut - each in a different color.

Choose One is a simple and fun game that almost anyone can play and enjoy.  It's much faster and more efficient than Would You Rather or Consensus, while scratching the same itch (In Consensus, you are asked to read the mind of the group, rather than that of one player).  For a more risque or "edgy" experience, you could play using the cards from Would You Rather.

For more information or to purchase the game, visit the Looney Labs web site. 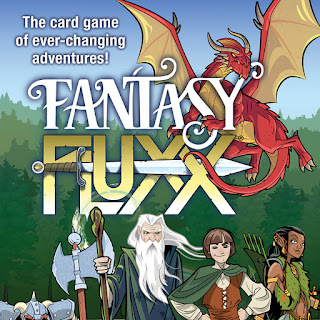